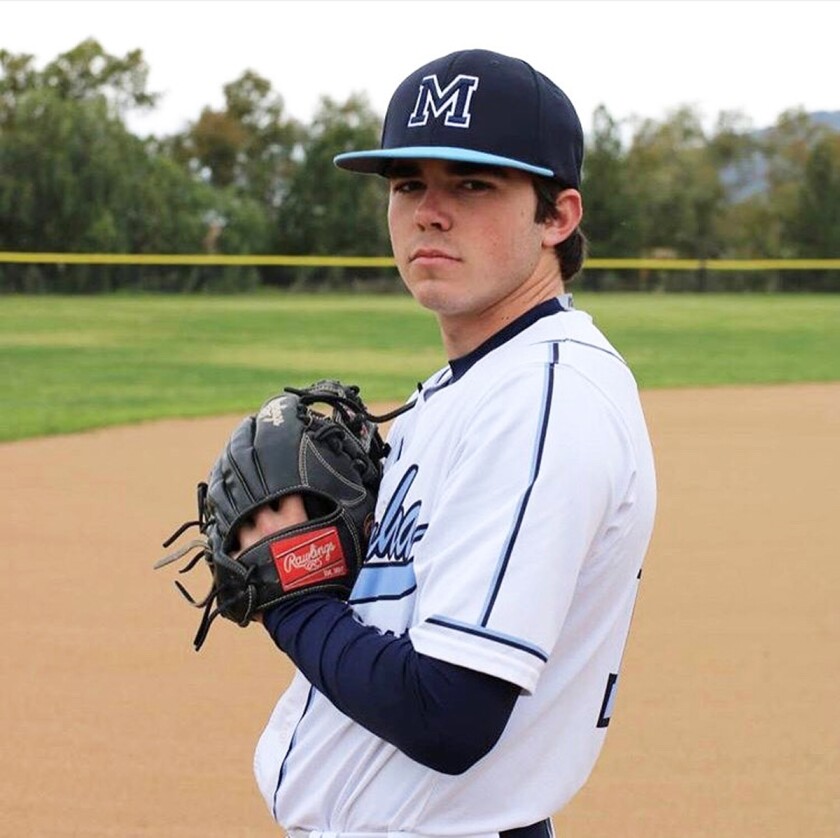 Now and then, Mason Sparks will get razzed by his baseball teammates at Maranatha Christian High for being so smart.

A transfer from San Marcos High before his sophomore year, Sparks has already been accepted into UCLA where he wants to major in biology with an eye toward one day becoming a doctor.

That would mean giving up baseball for the senior shortstop-pitcher.

Sparks is also among a small handful of Maranatha students in the running to be the valedictorian for the Class of 2019 at graduation in a few weeks.

“When I say something kind of stupid, they make fun of me for being so smart,’’ Sparks said, chuckling. “Down deep, I think they are happy for me, though. It took a little while to adjust from a big public school to a much smaller Christian school. Leaving my friends behind was tough, but this move has opened up a lot of new opportunities like more one-on-one time with teachers.’’

At 5-foot-8, 155-pounds, Sparks does not grab your attention as an athlete.

But this season has been spectacular and hard to explain as the Eagles were 15-5 overall and 3-2 in the Pacific League standings heading into this week.

Sparks has gone on a tear at the plate and never stopped.

His batting average has soared to .452 with 23 RBIs. He also hit his first homer.

“He’s just crushing the ball,’’ said Maranatha coach Steve Whitley, who is also the Eagles’ athletic director. “Even his outs are hard hit.

“Something happened between last season and this season. He just figured it all out. He understands what he needs to do on every pitch and now he pounds the ball.’’

Sparks began playing baseball in T-ball, like so many other players.

He gave basketball and soccer a cursory look, but he kept coming back to baseball.

“I’m not so worried about making outs now,’’ Sparks said. “Everyone, even the very best, make outs. This year I have no doubt when I’m hitting that I can get a hit off this pitcher. I’ve noticed I am hitting the ball harder than ever. A lot of work went into this change.”

While Sparks is pretty well set on becoming a Bruin medical student next year, his plans include playing some travel ball over the summer hoping to see what kind of interest might be out there from a school where he can pursue his dreams to become a doctor and maybe keep playing baseball.

He may still wind up giving up the sport and grabbing his books at UCLA.

“My favorite part of the game is pitching,’’ Sparks said. “It’s just me and the batter and I know what he’s thinking because I’ve been a hitter. That’s where the most intense competition is for me, trying to get that hitter to make a mistake. There’s more to pitching than just throwing 95 mph right down the middle all day.’’

According to Sparks, when he plays shortstop he’s not concerned about what his pitcher is doing.

There are enough things like making sure everyone knows how many outs there are or who has the next play at second base or are we shifting against a certain hitter.

“Shortstop is not a day off,’’ Sparks added.

When he does get a day off from playing, and homework, Sparks grabs his rod and reel and does some lake fishing to relax.

He’s strictly a catch-and-release guy, though.

“There’s a pond by a golf course and I caught a six-pound bass,’’ Sparks said. “I’ve caught him three or four times now.’’